Warning: "continue" targeting switch is equivalent to "break". Did you mean to use "continue 2"? in /homepages/26/d729187495/htdocs/clickandbuilds/CapoeiraHeritage/wp-content/plugins/a3-lazy-load/admin/admin-interface.php on line 361
 Slavery In Brazil | Capoeira Heritage 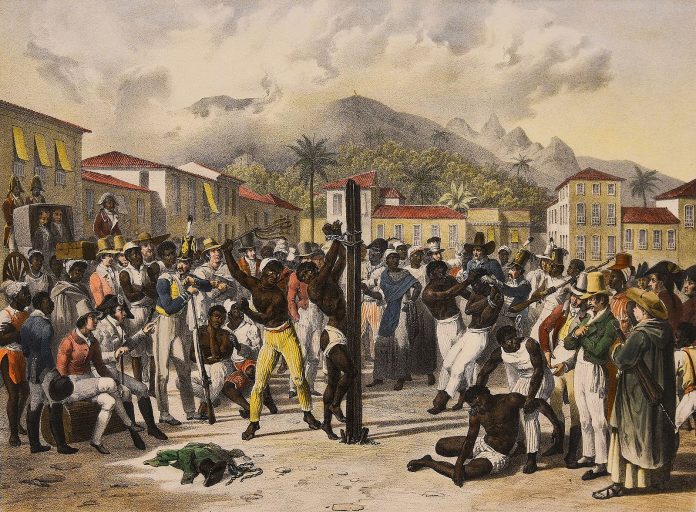 Although the Portuguese arrived in Brazil in 1500, it took over half a century for them to establish an economy. Portugal’s other dominions in Africa and Asia were more profitable and garnered more attention. The crown only established a strict bureaucracy in 1549, to fight off French and British incursions into Brazil. But by the mid-1500s sugar plantations began to spring up in the Northeast, where sugar grew well. The colonists looked to the Indians to provide the necessary work force for this labor-intensive crop. However, the enslaved Indians quickly fell victim to European diseases or fled to the unnavigated interior of the country. The Portuguese decided that the Indians were too fragile for plantation labor and, having been active in the Atlantic slave trade since the 1450s, they began to import African slaves. Soon, the sugar plantation system became entirely dependent on African slave labor.

African slaves were brought into Brazil as early as 1530, with abolition in 1888. During those three centuries, Brazil received 4,000,000 Africans, over four times as many as any other American destination. Comparatively speaking, Brazil received 40% of the total number of Africans brought to the Americas, while the US received approximately 10%. Due to this huge influx of Africans, today Brazil’s African-descended population is larger than the population of most African countries.

Beginning in the 1530s, slaves entered through the port of Salvador and stayed in the state of Bahia, where sugar plantations rose to prominence during the colony’s early years. The sugar trade then diminished and, although slaves were distributed to other parts of Brazil, many remained in Bahia and worked in the capital of Salvador. In the 1690s, gold was found in Minas Gerais, tripling the demand for slaves; of the estimated 1.7 million slaves brought into Brazil in the late 17th and early 18th century, about 1 million went to the gold mines and diamond fields. By 1760, the slowdown in gold and diamonds coincided with sugar’s second wind, causing a renewed influx of slaves to the Northeast. In the 1830s, coffee came to prominence in southern Brazil: 1.3 million slaves eventually made their way to the coffee plantations. Slaves were also sent to major cities and, by the late 18th century, 40-50% of households in São Paulo, Ouro Preto (in the state of Minas Gerais), and Salvador held slaves.

Over the centuries, Portugal exploited different parts of Africa. In the 16th century, Senegambia provided most of Brazil’s slaves; in the 17th century, Angola and the Congo rose to dominance; and in the 18th century, slaves were coming from the Mina Coast and Benin. “Without Angola no slaves, without slaves no sugar, without sugar no Brazil” was a common expression during the 17th century. During the last 50 years of the slave trade, large numbers of Yoruba people (from the area that is currently Nigeria and Benin) were brought to cities in Northeastern Brazil, resulting in a lasting impact on the culture of that region.

The slave trade lasted longer in Brazil than in almost any other country in the Americas.

Slavery was abolished in the British and French Caribbean, the United States, and Spanish America a generation or more before it was abolished in Brazil. When Brazil gained independence, in 1822, slavery was such an entrenched part of the system that the elites who structured the new nation never seriously debated the issue. Brazilians believed that the prosperity of their country depended on the institution of slavery, since they so desperately needed the labor, but slavery was rarely defended on racial grounds.

The slave trade was not only continuing, but accelerating: the same number of Africans (1.7 million) entered Brazil between 1800 and 1850 as during the entire 18th century. Brazil ended the legal slave trade in 1850, due to pressure from Great Britain. Britain had outlawed slavery in the British colonies in 1833, and rising labor costs in the colonies made it very difficult to compete with the slave economies of Brazil and Cuba. Beginning in the 1830s, Britain’s Royal Navy began to intercept slave ships headed for Brazil, in order to free the enslaved Africans. While the British were not very successful at first, increased efforts between 1845 and 1850 allowed them to seize almost four hundred ships. Brazil was forced to close down the slave trade.

The abolitionist movement in Brazil began to gain widespread support in the late 1860s, due in part to pressure from the outside world. Also, after the end of the legal slave trade, Brazil experienced a labor shortage because slavery had been sustained by continued imports of slaves rather than reproduction among the slave population. And, finally, the slaves were getting harder to control, and slave owners feared revolts. In 1871, Brazil passed the “Law of the Free Womb,” freeing from that time forward the children born of slaves. In 1885, Brazil passed the Sexagenarian Law, freeing slaves over sixty-five years of age, though few slaves reached that age. Finally, on May 13, 1888, the “Golden Law” abolished slavery with these simple words: “From the date of this law slavery is declared extinct in Brazil.”