Warning: "continue" targeting switch is equivalent to "break". Did you mean to use "continue 2"? in /homepages/26/d729187495/htdocs/clickandbuilds/CapoeiraHeritage/wp-content/plugins/a3-lazy-load/admin/admin-interface.php on line 361
 The Quilombo dos Palmares | Capoeira Heritage 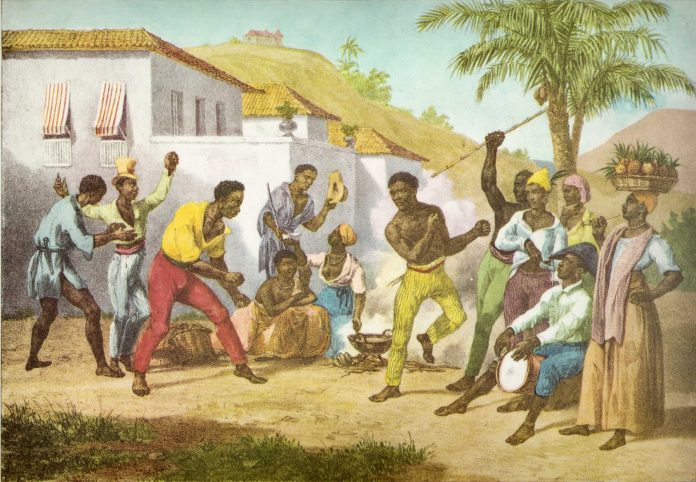 Runaway slave colonies called quilombos were found throughout the Brazilian countryside for the duration of slavery. The most famous of these was the Republic of Palmares, a network of settlements in northeastern Brazil that survived nearly a 100 years despite repeated attacks by the Portuguese. Palmares was dismantled in 1694.

In terms of defining the quilombo, there are other intricate issues to consider. For instance, the word “quilombo” does not appear in the vocabulary of early seventeenth-century Brazil. Instead, the fugitive slave settlement was known as mocambo, an appropriate description since mu-kambo in Ambundo means a hideout” (Price 174). This literal meaning of the word is most helpful in understanding the true function of the quilombo. These are safe havens and places where refugees could gather, even in small numbers, to live free of oppression. Small bands of fugitive slaves would escape, often taking with them possessions from their home plantations, to begin somewhere away from white rule and with the intention of not being caught.

Like other quilombos, Palmares was formed when a small group of slaves left their home plantation and, like in many other cases, upon leaving they took all they could and did significant damage to the plantation. The raid that began the flight to Palmares involved forty men who, under cover of night, rose up against their masters in a surprise attack, killing some and injuring other white members. In their violent departure, they took all they could carry, mostly general supplies, and ran off into the forest. Eventually they would cross the harsh mountains and settle in a valley that came to be the quilombo at Palmares.

This group of forty men was able to set up a rough camp that eventually began to grow both in size and complexity. In order to expand their numbers, they set off on raids to more plantations and encouraged slaves to join them at Palmares. After a number of such attacks, word began to spread about the growing quilombo and some members came from plantations or from other quilombos.

At the very beginning, the quilombo at Palmares was not the self-sufficient community it would later become. Before the true signs of settlement began such as formalised agriculture or political society, the inhabitants lived by becoming bandits, stealing provisions and supplies from white plantations at every opportunity. They did not generally steal large items that could be used for skilled trades (as would later occur) but small items and foodstuffs for the most part. In the first year of the quilombo, there was little evidence to indicate that the quilombo would eventually pose any threat to the whites and its development was slow although ultimately successful.

As the population of Palmares grew, a more structured and settled way of living began to emerge with the introduction of formal agriculture which allowed better sustainability to support the ever-growing population. Within the first twenty years of the settlement, a tentative peace was reached between the residents of Palmares and the nearby Portuguese population. As one can imagine, this was not necessarily because the Portuguese wished to make a lasting peace, but merely because the sheer size of the quilombo was frightening.

The population just before the raid that effectively ended the quilombo was nearly 30,000 by some estimates and this was enough incentive for the Portuguese to keep their distance until retaliation and the demise of the fugitive society could be organised. During this span of peace, the constant war between the colonists and the slave community subsided and actual trading between the two occurred.

While this idea of peace and freedom seems somewhat resolute during the period of relative tranquility discussed above, the quilombo at Palmares was not the perfect society by any means. For slaves on plantations, the chance to gain freedom through residing at Palmares was not always a positive experience. For example, at the inception of the quilombo, the population was comprised of only men. It eventually became necessary to bring in women, but instead of finding just volunteers from plantations, the fugitive slaves of Palmares took white, Indian, and even fellow African slave women as prisoners and brought them back against their will. In sum, while it might have been beneficial to be a strong male African slave during this time, being a woman of any race was dangerous and left one open to attacks on many levels.

Aside from women, local Indians who were at first hostile, joined into the Palmares quilombo, mostly because this was one of the only ways they might have been able to gain an upper hand against the white colonists who had stolen their land and imposed several restrictions on their lives. While this is not to say that relations between Indians and the fugitive slaves, there was an alliance borne out of necessity. Between these two aspects, the racial and cultural makeup of the inhabitants of the quilombo at Palmares was diverse and became even more so as the children of mixed races were born to the women (who themselves were of various races) grew up. In some ways, this community represented a picture of racial harmony and coexistence.