Warning: "continue" targeting switch is equivalent to "break". Did you mean to use "continue 2"? in /homepages/26/d729187495/htdocs/clickandbuilds/CapoeiraHeritage/wp-content/plugins/a3-lazy-load/admin/admin-interface.php on line 361
 Was Mestre Bimba an Angoleiro? | Capoeira Heritage

WAS BIMBA AN ANGOLEIRO?

Understanding by “Angola” the capoeira game (not the fight), the initial form and the only form of capoeira existing in his youth, Bimba was an angoleiro and all of us in regional continue as angoleiros… The only modification that the Mestre introduced was the establishment of a systemized teaching method in order to facilitate the learning of those students who did not bring in their body the African cultural inheritance of the candomblé rhythm and movements. This method is so successful that it also works with the direct descendants of Africans.

The movements that Bimba introduced are compatible with capoeira’s nature. They are even used by angoleiros themselves in self-defense, but are excluded by ritual in order to protect the participants’ personal safety and to avoid violence. The Iúna game represents the highest point of regional and demonstrates all the ability and choreographic potential of the capoeira game.

Bimba respected the capoeira game and considered it the climax of regional so much that he limited the Iuna game to graduated students, who were the only ones worth of the title of ‘capoeirista’ in his style…

The introduction of new movements, the broadening of the self-defense applications, the throws and the special trainings – these are natural growths arising from capoeira’s maturing in a developmental process that will ultimately culminate in sporting regulations.

Thus the final response is… Bimba was an angoleiro, yes sir!

And all his true students continue as angoleiros… when they play capoeira… without fights and violence!

And we too honor Mestre Pastinha! 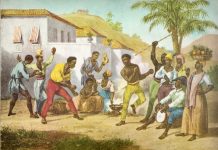